Test managers often have to deal with superhuman juggling of timelines, resource allocations and continuously changing specification while facing increasing pressure from management as the shipping-date draws closer. Furthermore, the test manager is responsible for making sure that the traceability is completed, that test data integrity remains intact and that change management procedures are followed correctly, even under situations of extreme stress.

Efficient change management, planning, tracking and reuse of test executions are therefore much appreciated tools in the V&V Managers tool box. The Aligned Elements Test Runs aims to address these challenges. The Test Runs manages the planning, allocation, execution and tracking of test activities. Let's dive into the details.

The Test Run Planning section is the place to define the Test Run context, much as you would write a Verification Plan. 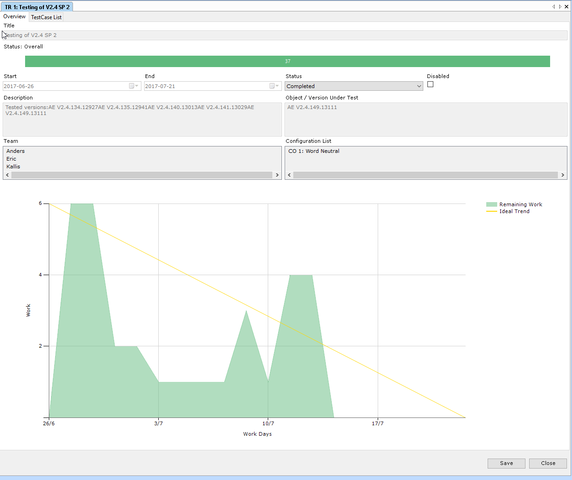 Once the planning phase is completed, the Test Execution can begin.

Test Case data is kept separate from the Test Execution result data, permitting a high degree of test case reuse and a clear separation between Test Instructions and Test Results.
Consistency checks are optionally carried out on the Test Case before execution in order to ensure that tests cannot be performed until all foreseen process steps are completed.
During execution, the test input data is optionally kept read-only, preventing testers to modify a reviewed and released Test Case during execution.

All Test Team Members can access the Test Run and simultaneously Execute Tests as well as continuously monitor how the Execution phase progresses.

During Test Execution, Defects and Anomalies can be created and traced on-the-fly without having to leave the Test Execution context. The Defects can be tracked in either Aligned Elements internal Issue Management system or already existing integrated Issue Trackers such as Jira, TFS, GitHub, Trac or Countersoft Gemini or any mix of these systems. Created Defects and their corresponding status are displayed in the Test Run.

When developing medical devices, it is of paramount importance to keep your Design Control under tight change control.
The Test Run assist the testers and test managers in several ways to accomplish this goal, including optional actions:

Testing Variants of the Object Under Test

If several variants of the Object Under Test exist, it is sometimes desirable to create variant specific test results for common test cases and subsequently create separate traceabilities for the variants. The Test Run uses a concept called "Configurations" to achieve this behaviour. A Test Case is executed for one or more Configurations to make sure that variant specific test results are kept separate.

The exact data composition of a Configuration is customizable to fit the needs of each customer.

Once all Test Cases has been completed, the Test Run and all its content is set to read-only. Optionally, a Snapshot of all Test Run relevant items is created as part of the completion procedure. A Test Run report containing all the necessary Test Run information can be inserted into any Word Document using Aligned Elements Word Integration with a single drag and drop action.

Note: Burn Down Charts is under development at the point of writing and planned to be released in the next service pack.