The first amendment to the IEC 62304 was released in June 2015 and contains some welcome contributions, including:

There was also some interesting changes made to Software Safety Classifications in section 4.3.

For those familiar with the original IEC 62304 text, the following section describes to assign a Software Safety Classification:

"The MANUFACTURER shall assign to each SOFTWARE SYSTEM a software safety class (A, B, or C) according to the possible effects on the patient, operator, or other people resulting from a HAZARD (being a potential source of Harm) to which the SOFTWARE SYSTEM can contribute.

The software safety classes shall initially be assigned based on severity as follows:

Class A: No injury or damage to health is possible

Class B: Non-SERIOUS INJURY is possible

If the HAZARD (i.e. the potential source of harm) could arise from a failure of the SOFTWARE SYSTEM to behave as specified, the probability of such failure shall be assumed to be 100 percent."

Now, software in itself has never killed anyone. When harm occurs due to a software failure, there is always some other executing agent involved, e.g. some piece of hardware or a human actor. Consequentially, for harm to occur, there must exist a causal chain of events, tying the software to the harm via that external agent. A causal chain of events occurs with some probability, sometimes called probability of harm.

Probability of harm did not play any prominent part in the original release of IEC 62304 and focusing by effectually removing the probability of failure from the equation due to the difficulties of establishing it in quantitative terms sometimes lead to more or less absurd results.

In examples where failure have severe consequences but are extremely unlikely to result in any kind of harm, the software safety class is C according to IEC 62304:2006 (if no hardware mitigations exist), regardless of how unlikely the risk of harm is.

And here is where the authors of the IEC 62304:2015 Amendment 1 have done a great job reformulating the Software Safety Classification section.

"a) The MANUFACTURER shall assign to each SOFTWARE SYSTEM a software safety class (A, B, or C) according to the RISK of HARM to the patient, operator, or other people resulting from a HAZARDOUS SITUATION to which the SOFTWARE SYSTEM can contribute in a worst-case scenario as indicated in Figure 3. 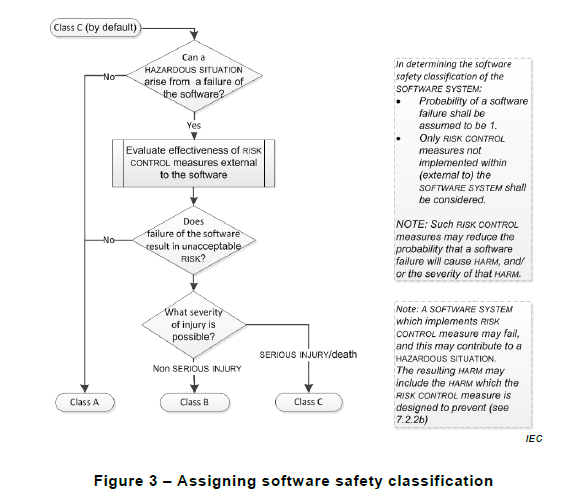 The pivotal point lies in the use of the terms "RISK of HARM" and "unacceptable risk". RISK, in this case, being a combination of severity AND probability.

The combination of these two probabilities becomes the probability of occurrence of harm. IEC 62304:2015 Amd 1, explains this further in section B4.3 and also includes a Figure (B.2) from ISO 14971. 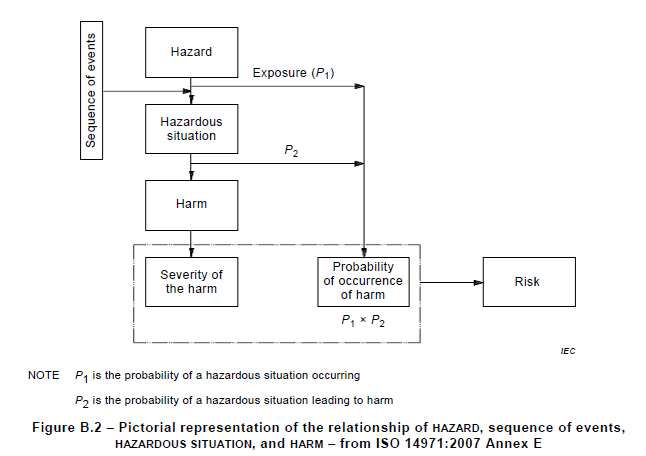 There are also further complications. Where it previously was sufficient to map severity to the  “no injury”, “non-serious injury” and “serious injury” categories, which is fairly straight forward, we now have the additional possibility of bringing in the risk's accetability into the picture.

Establishing severity and probability is one thing that can be done fairly objectively, but in a rational manner argue why a particular combination of these factors is “unacceptable” or “acceptable” is subjective at best, opening the software safety classification establishing to an amount of arbitrariness. On the other hand, "unacceptable" and "acceptable" risks are terms defined in ISO 14971 and should therefore not be new territory to the average medical device manufacturer.

The software safety classification method in IEC 62304:2015 Amendment 1 has certainly become more intuitive. The price for this change lies in the extra effort of:

To finalize this discussion on Software Safety Classification in IEC 62304:2015 Amd. 1, I would like to point out sections in the standard that have received some welcomed clarifications.

The new version of the standard amends that segregation of software items does not necessarily have to be physical. In the 2006 version, the only segregation exemplified was hardware related, which has lead to the false belief that segregation between items has to by physical. This is not the case. The 2015 Amendment makes it clear that the main concern is to assure that one item does not negatively affect another. Furthermore, the segregation applied shall make sense in the context it is used as well as clearly documented and rationalized.

A software item implementing a software risk control (i.e. not external risk controls which can have a positive effect on the classification) shall be assigned the same software safety classification as the software item containing the risk it is controlling. This idea is applicable not only on System level (as described in the 2006 version) but also Item/Unit level.